RACE COUNTS recently updated the data behind three of the four Crime and Justice indicators and the overall Crime & Justice Index. In this blog post we will dive deep into the indicators and highlight key findings, as well as provide an analysis of the landscape underlying the indicators and a discussion of potential policy solutions. 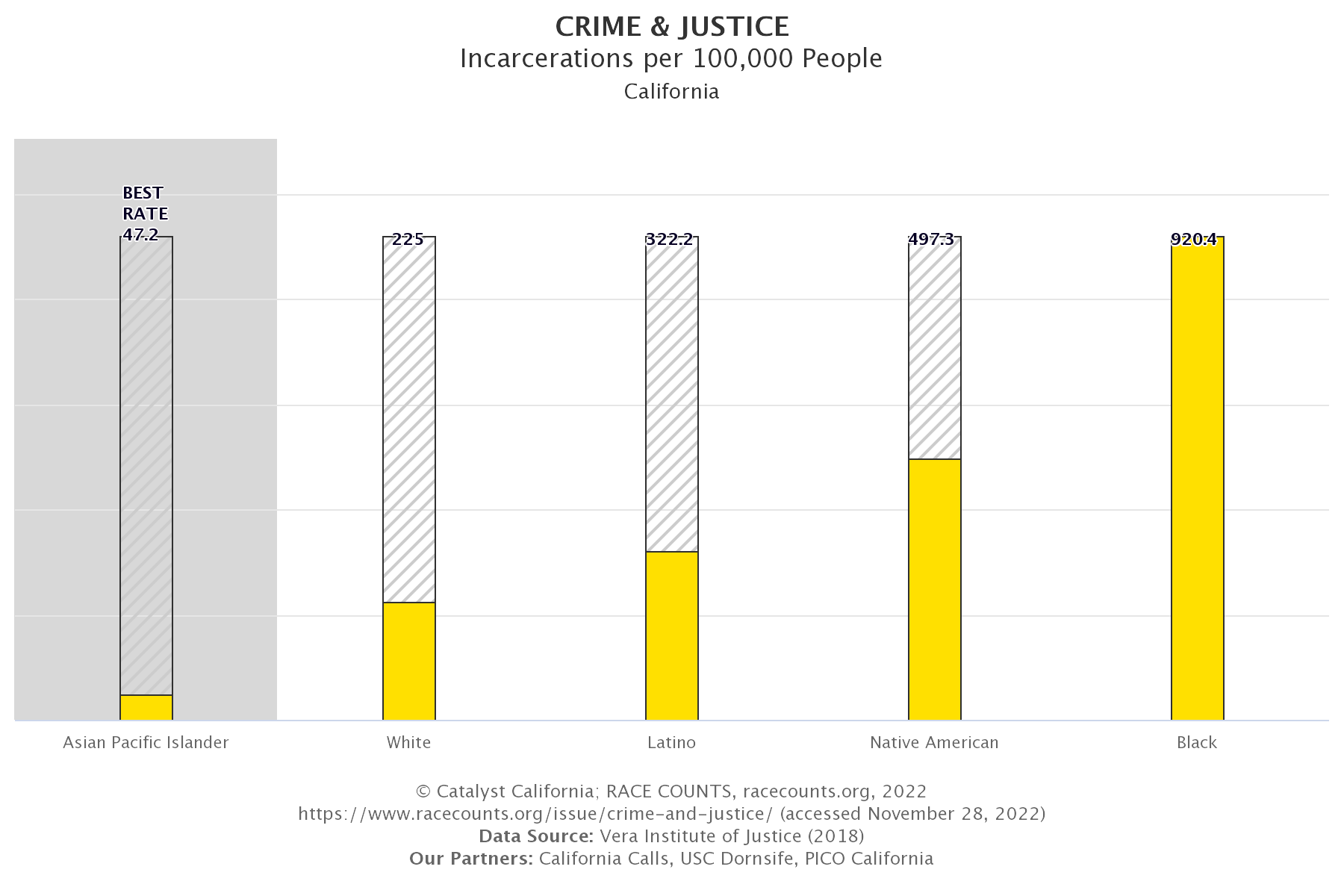 At the state level, the Black, American Indian and Alaskan Native, and Latinx incarceration rates are higher than the state average. Black Californians are by far the most likely to be impacted, they are 4 times more likely to be incarcerated than non-Latinx Whites. Statewide, we see that Bay Area counties have most of the lowest incarceration rates in the state, but also some of the highest racial disparities in incarceration. The Yolo, Sutter, and Los Angeles criminal justice systems, result in the most racially disparate incarceration rates. It is important to note that the geographic findings are influenced by where jails or prisons are located and not necessarily indicative of where a person who is incarcerated is from – it is not uncommon, particularly for those incarcerated in prison (vs. jail), for someone to be arrested in one county and incarcerated in another.  This is a data limitation that hinders our ability to identify disparities by neighborhood. 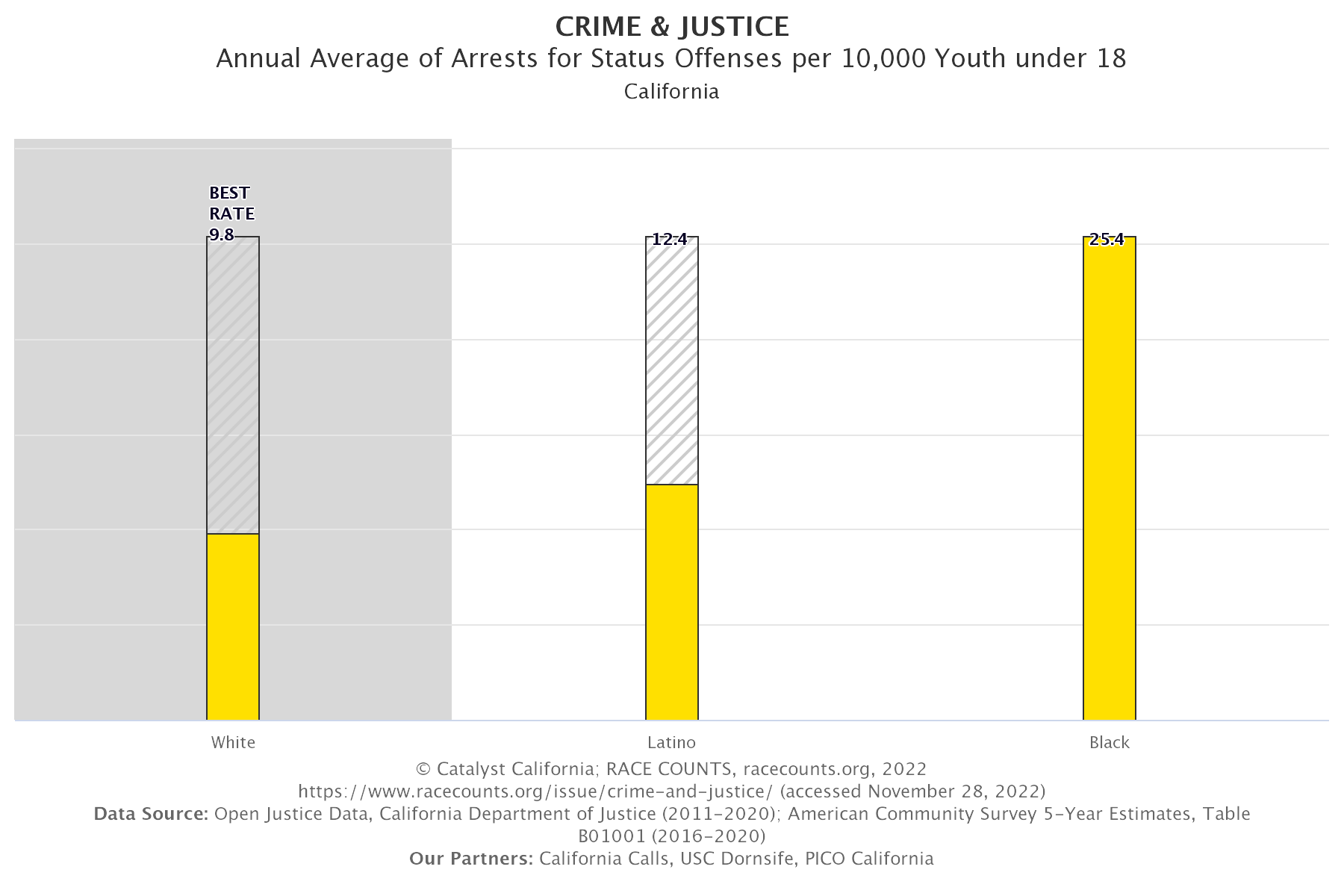 Black and Latinx youth have a higher arrest rate for status offenses, such as truancy and curfew violations for people under age 18, compared to the state average. In fact, Black youth are 2.6 times more likely to be arrested for status offenses than non-Latinx White youth. Glenn, Shasta, and Merced. Humboldt, San Joaquin, San Mateo, and Marin County law enforcement agencies arrest youth at the most racially disparate rates statewide. 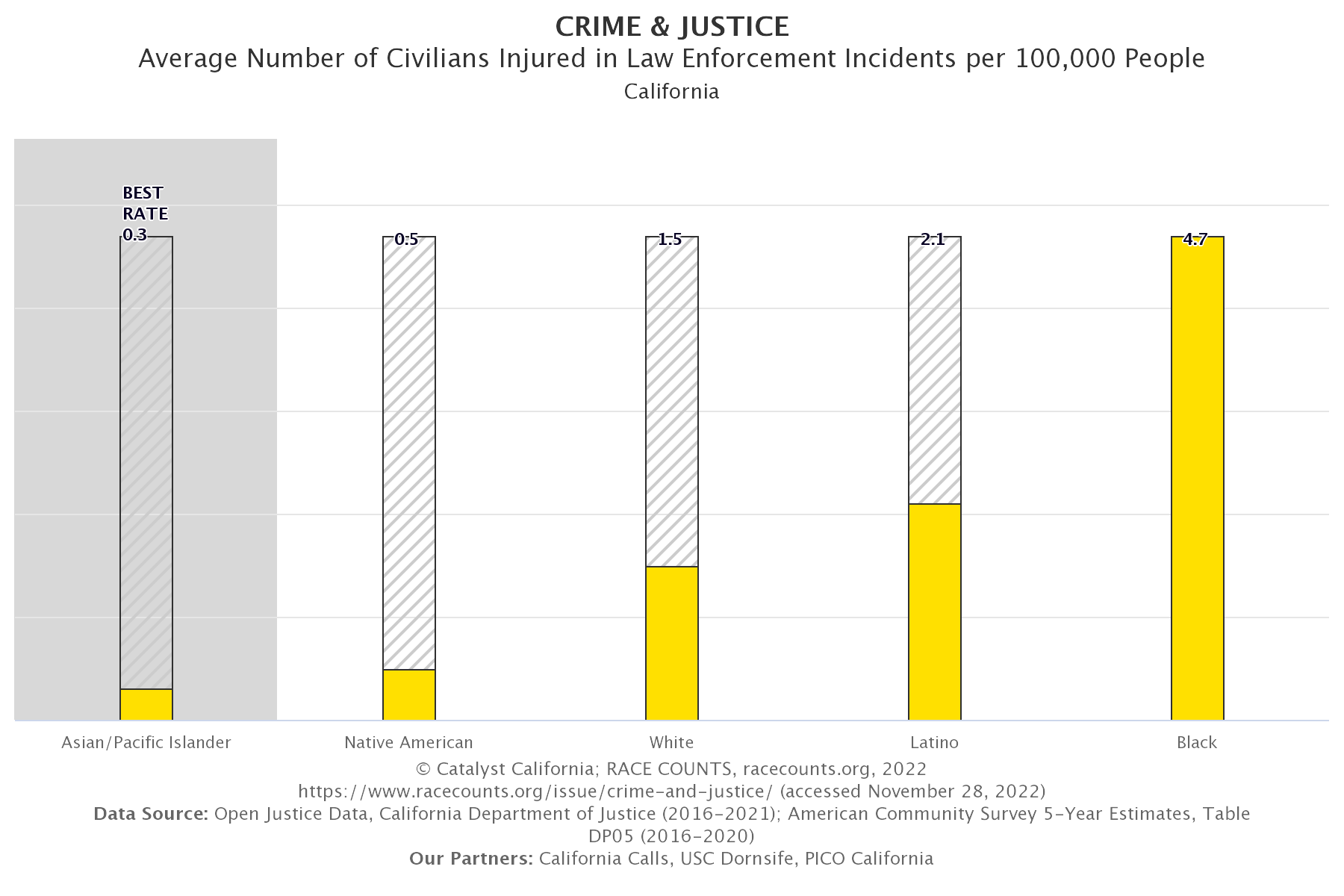 Law Enforcement Use of Force 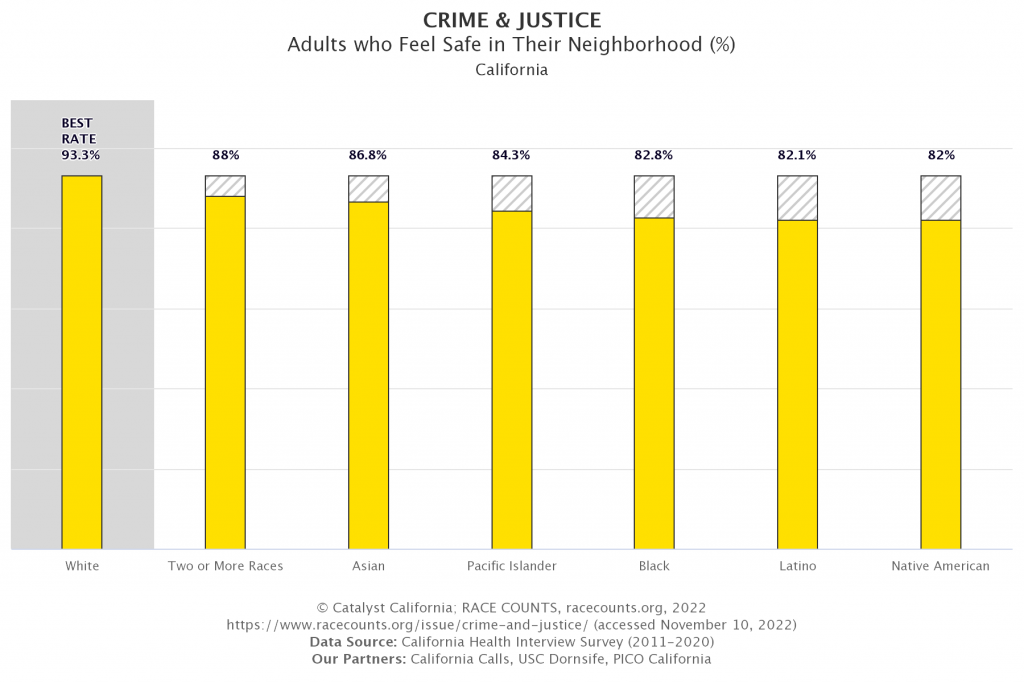 From slave patrols to the “war on drugs”

The racial inequities resulting from the criminal legal system can be traced back to a long history of structural racism. As an example, law enforcement in the U.S.A. largely grew out of the Reconstruction Era South “slave patrols” that were formed to apprehend and return enslaved Black people who had escaped.[i] More contemporary policies coming out of the “tough on crime” era and “war on drugs” in the 1970s and 1980s – such as harsher punishments for crack (vs. powder) cocaine, mandatory minimums, and “three strike” laws – have also played a significant role in mass incarceration. While these policies are “race neutral,” they have had a disparate impact on communities of color.[ii]

Racially-biased decision making by actors within the criminal legal system plays a large role in racial inequities. Researchers have found bias in law enforcement traffic and pedestrian stop decisions, with the proportion of stops based on reasonable suspicion being higher for Blacks compared to any other racial or ethnic group.[iii]. This is despite research that indicates that Blacks are not more, and often less, likely to be found in possession of contraband or evidence of a crime than White people.[iv] For a deeper dive on disparities in traffic stops check out the recent Catalyst California and ACLU California Reimagining Community Safety in California report. Research also suggests that racial bias plays a role in uses of force. This research finds that after statistically controlling for contextual factors such as gender, age, stop reason, gun possession, and applicable law enforcement agency, does not eliminate racial disparities in incidents where an officer pointed a gun at or shot a person.[v] Law enforcement officers are not the only criminal legal system actors to make biased decisions. Prosecutors, judges, and probation and parole officers often make biased decisions – such as which offense to charge, length of sentence, and probation or parole denials or revocations – that result in racial inequities. As mentioned earlier, many of these decisions are constrained by “race neutral” policies – for example, the policy that mandated more severe punishment for crack (vs. powder) cocaine – that have disparate impacts on people of color.

One key factor that can result in racially-biased decision making is implicit bias. Research shows that due to implicit bias actors within the criminal legal system may have negative associations with people of color, and Black people in particular, that can influence their decisions and behaviors.[vi] Implicit bias can also impact perceptions of safety based on neighborhood demographics.[vii] Furthermore, politicians, the media, and “law and order” proponents will often engage in fear mongering that can increase concerns around public safety to serve their own means – often at the expense of people of color who are often portrayed as threats to public safety.

In addition to the history of systemic racial discrimination in the criminal legal system, there is also a legacy of systemic discrimination and disinvestment in the areas of housing, education, and economic development that led to racially segregated communities with high concentrations of poverty.    However, in many of these communities it is common to see significant allocation of resources towards law enforcement and incarceration and relatively little allocation of resources towards addressing the underlying socioeconomic conditions affecting low-income communities and communities of color.  In fact, law enforcement spending now consumes the largest share of many localities’ discretionary revenues—crowding out the possibility of funding other government functions that are better suited to address social problems.[viii]

The status quo provides limited oversight of and accountability for law enforcement. Too often when law enforcement officers perpetuate harm or behave unjustly, they face few if any consequences. Increasing accountability is a key mechanism to help reduce racial disparities in criminal legal system outcomes. The need for greater accountability is part of why Catalyst California has endorsed Measure A in Los Angeles County, a ballot measure in the upcoming November election that would increase accountability of the L.A. County Sheriff’s Department by allowing the L.A. County Board of Supervisors Sheriff to be removed for cause with a supermajority vote (as of this writing, it appears that L.A. voters have approved this measure). One additional way to increase accountability is to promote greater transparency, including making data and law enforcement records publicly available.

Law enforcement plays a large role in our system of public safety. This role includes serving as first responders to a variety of social and quality of life issues such as homelessness, behavioral health crises, and substance abuse. These issues would be better addressed through non-law enforcement care-centered approaches. Despite their role in responding to these issues, law enforcement agencies receive little training and are largely unqualified or ill-suited to address these issues. As a result of this role, individuals are often exposed to law enforcement unnecessarily exposing individuals to potentially harmful, racially-biased interactions that could lead to being the victim of a use of force incident, arrest, and ultimately incarceration. To address this, the scope of law enforcement should be reduced.  One potential avenue for reducing the role of law enforcement is limiting their authority to enforce traffic safety. Law enforcement dedicates a substantial amount of time and resources towards stopping people for minor traffic violations that pose non-imminent and relatively low safety risks. Furthermore, data indicates that there are often racial inequities in who gets stopped for traffic violations.[ix] As an alternative to having law enforcement be responsible for minor traffic violations, this responsibility could be shifted to unarmed members of a department of transportation. Furthermore, trained professionals other than law enforcement such as outreach workers, behavioral health professionals, and can be utilized as first responders to events such as mental health crises. Violence interventionists are also potential alternatives to armed law enforcement that can be used help promote public safety.

In addition to decriminalization, progressive prosecutorial reform is a vital path for reducing racial inequities in incarceration. District Attorneys have significant power in the criminal legal system including having influence over whether charges are filed, referral to diversion programs, bail, offenses charged, settlements, and recommended sentencing. Historically, this discretion has had a disparate impact on people of color – for example research finds that “Black people are more likely to be subjected to pre-trial detention, receive a plea offer, and receive harsher punishments than their White counterparts.”[x]  To offset such outcomes, a concerted effort should focus on promoting common-sense charge filing policies that advance racial equity and improve long-term safety.

[i] “The Origins of Modern Day Policing.” NAACP, December 3, 2021. https://naacp.org/find-resources/history-explained/origins-modern-day-policing.